Hot Off the Collar | Volume&nbsp14

After a year and a half as a part of this team, I continue to be amazed and impressed by the staff’s capacity for hard work and compassion. It’s evident in everything they do from the long hours of hospital quality cleaning to opening their hearts, doors and lives to every animal that comes into our care.

Despite a comprehensive knowledge of what our staff accomplishes on a daily basis, every once in a while, something happens that catches me totally off guard.

Recently I received a video from Christie, our Animal Programs Manager with the caption, “Today’s work station.” When I looked at the thumbnail, I couldn’t understand what I was seeing but as I soon as I hit play, it became clear; Christie was sitting on a blanket, on the floor of a dog kennel with her laptop.

Why? Because in September, animal control officers brought us 7 dogs that had no idea how to be dogs. Before they showed up at our doorstep, they were living a life of desperation and suffering. They had never experienced simple things like walks, regular feeding or basic human interaction. Since they arrived at the KHS, we’ve tried new and innovative techniques in our efforts to integrate them into a “normal” existence. Some have made progress and some will barely leave their kennel. Our staff has shown extraordinary patience and has gone to great lengths to familiarize them with the basics of domestic life. Just last week, we actually got two of them – Georgie and Casper – into harnesses for a short walk. The dogs were mystified but curious. Just as they seemed to be getting the hang of it, a couple of motorcycles sped by. Georgie and Casper immediately dropped to the ground and cowered in the grass. It was a setback, but we were still excited by the potential for development.

Later that same afternoon, after Georgie and Casper’s walk, I received the video.

To provide a little context for Christie’s chosen workspace; we do the best we can in our aging shelter but the kennels are not nearly the ideal space for dogs let alone people. The steel bars and the cement block walls are cold and inhospitable. Without modern sound dampening features, the slightest noise is amplified. Then you have the smells. Our HVAC unit is long past its expiry date and while it does the basic job of warming or cooling, the ventilation is exactly what you’d imagine from 50-year-old industrial infrastructure. If we don’t manage to get a dog out for a walk in time or if one of them has some intestinal issues, which is a pretty common stress reaction, the odor can be overwhelming. Now imagine intentionally settling into that environment for an afternoon of answering emails or reviewing policy.
Christie chose to work in the kennel of one of the most apprehensive members of the group, Ghost. Armed with cold cuts and few other highly prized treats her goal was to make Ghost more comfortable around people. She waited patiently for the terrified white dog to even show his head from the other side of the kennel and eventually, he peeked out. Christie offered a piece of ham. He sniffed around it a bit then gingerly took it and backed away. A few seconds later, he popped out again, looking for another treat. This time he dropped it but it landed too close to Christie so he left it. The video ends after Ghost sniffs at a third treat, takes it, but doesn’t eat it.

I watched several more times before I shut down the media player and opened Microsoft Word to write this blog. If I’m totally honest, Christie’s unusual approach to Ghost’s anxiety should not have surprised me. It is just another example of perseverance that I see from our staff day in and day out. I consider it a privilege to work with this incredible team. They are often overlooked when it comes to stories in the media or posts on social channels but when you see their devotion every single day, you can’t help but be astonished.

Their desire to find animals a forever home is relentless, their compassion is boundless, and their stubborn refusal to accept defeat is why the KHS continues to set the standard in animal welfare.

In a year when COVID has so many people wishing they could escape, I feel very much at home alongside my colleagues at the Kingston Humane Society. Hopefully, with a little luck and some creative choices for working environments, Ghost will soon feel at home too. 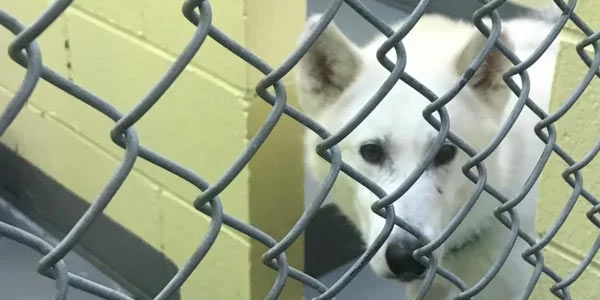