We save them and they save us

Hot Off the Collar | Volume&nbsp15

Dealing with sick, injured and abused animals can be a heartbreaking responsibility at the best of times but in the face of COVID our emotional welfare has been stressed to the breaking point. Yet, throughout the challenges of 2020, the KHS staff has shown no outward signs of exasperation or defeat. They simply wipe away the tears and move forward with determination and resilience. I’m so proud of them for everything they do, but never more so than on the evening of December 22nd. Late that day, we received a call from an individual who said their cat was having trouble giving birth. After Christie, our Animal Programs Manager had a discussion with the owner, it seemed possible that the first kitten might have been stuck in the birth canal. We advised the caller to take the cat to their vet immediately. The owner indicated they could not afford veterinary care and instead asked to surrender the cat to us. We agreed. The owner said it would take an hour or two before they could bring us the cat. That kind of delay would mean almost certain death for the kittens and potentially for the mother too. Instead we drove to the house and picked up the cat while our veterinarian Dr. Laurie prepared her team for whatever might be required. It would be all hands on deck. At the end of the day after 9 hours of treating, feeding and nurturing all the other animals in our care, this amazing team of professionals went to work in an effort to save a mother and her kittens.

The first born a Calico, came out naturally and was immediately placed in an incubator. The other two kittens required an emergency C-section. As the second one was delivered, he had a heartbeat but was not breathing. Christie – pressed into action to assist – worked to stimulate breathing by gently rubbing him with a warm towel and removing mucus from his tiny airway. Christie picks up the story from here, “One minute he seemed okay, the next I wasn’t sure he would make it. It was such a roller coaster of emotions in those moments after he was born.” Then, Heather, one of our vet techs, gave the kitten sub-lingual naloxone to counteract the surgical sedative given to the mother. It worked. The tiny orange kitten began to breathe on his own and was given oxygen. The focus then turned to the last and most critical kitten. As it was removed, from the uterus, it had no heartbeat and was not breathing. Natasha, – a trained veterinary technician who is also our Foster Coordinator – went through the same process of rubbing, clearing the airways and giving naloxone without success. Then, after injecting the kitten with epinephrine to re-start the heart, Dr. Laurie instructed Natasha to insert a needle into the nose of the kitten. This was a last ditch effort to stimulate an acupressure point that would create a cardiopulmonary response. After a tense moment which I’m sure felt like an eternity, the kitten responded and began to breathe. Following a bit more oxygen and gentle warm-towel rubs, the two brothers were placed into the incubator alongside their sister. Shortly after that, the mother joined her newborn family and the kittens began nursing. The whole family was monitored for a period of time before Dr. Laurie took them home overnight. By morning the kittens were gaining weight and mom was doing well. Three days before Christmas at the end of a year which has significantly impacted our physical and emotional health, this dedicated team saved a mother cat and three kittens. It may seem small when measured on a global scale, but to me and to every one of us that works for the Kingston Humane Society – it’s a sign of hope, and in 2020 we could all use a bit more of that.Merry Christmas, Happy Holidays and here’s to a better year ahead.
- Gord Hunter, Executive Director
View All Blogs
Donate Now 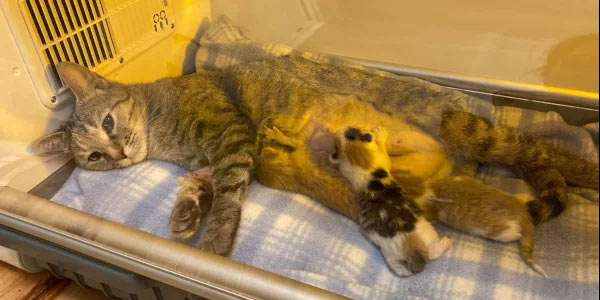