Hot Off the Collar | Volume&nbsp27

It was the stare that did me in. As I walked back to my office after a committee meeting and opened the door, she greeted me with a plaintive, baleful look that simply said, “I missed you.” That’s what broke me.

From the moment she arrived I knew that Bernadette would be difficult to adopt. Big dogs are often the hardest to re-home and Bernadette the St. Bernard was most definitely a big dog. Not as big as she should have been mind you. When she came to us as a “stray”, she had pancreatitis, no appetite and weighed a paltry 35kg – about half what she should normally weigh. We treated her for pancreatitis and moved her into my office to see if a less stressful environment would prompt her to eat.  I was cautiously optimistic, but flowing just under the surface of that optimism was an inescapable current of dread. The odds were stacked against her. As an 8-year-old large-breed dog with some medical issues, finding Bernadette a forever home would be a struggle and time was not on our side. Big dogs do not thrive in a shelter environment. They are more likely to show stress-related behaviour like disinterest, anxiety or aggression.
Initially the move into my office seemed to work. She was more comfortable and her appetite returned. For a while, I was convinced that we would find a home for this loving, beautiful girl. Then, as if a switch clicked in her brain, she began to growl, bark and lunge at some staff members.
We watched her, analyzed her behaviour and tried to determine what was setting her off. Was it men? No, she was fine with me. Was it masks? No. Volume of voices? No again. Her reactions seemed totally unpredictable and she was taking a rapid turn for the worse.  Her lovely, sweet demeanour had changed and we didn’t know why.
Our next step was to get her out of the building entirely. Perhaps in a home setting, she would be the gentle giant we thought she was. She spent a weekend with one of our staff members. She was mostly good but, in the car, she became very agitated and aggressive. When she returned to my office on Monday things had changed again. Previously, Bernadette had shown nothing but love to Natasha our Foster Coordinator but on Monday evening she started growling and lunging towards her. Our staff was increasingly in danger when attempting to get her out for a walk or even just trying to feed her. The list of people Bernadette tolerated was shrinking. All the rescues we contacted were over capacity and we couldn’t safely adopt her knowing she could turn on a family member or a stranger without provocation. A heart-wrenching decision was looming. As a last-ditch effort, we brought in an experienced dog trainer but Bernadette lunged and bit the trainer. Thank goodness the dog trainer was prepared and got away without sustaining an injury.
Earlier in my description of Bernadette you may have noticed that I used quotes around the word “stray”. That’s a description we use in animal welfare to indicate questionable circumstances. A short time before Bernadette came to us, we received an anonymous call asking if it was possible to surrender an older, female St. Bernard. We explained the process: yes we take surrenders, no we couldn’t right at that moment because we were full, yes we would put them on our surrender list and do the intake when we had space. The caller thanked us for the information and hung up without leaving any contact information. Less than a week later, animal control officers arrived with an older, female St. Bernard that was found wandering in a neighbourhood. Sadly, this happens more often than you’d think. People who have cared for an animal for a significant period of time choose to abandon them rather than wait out the surrender process. Sometimes bylaw officers drop them off. Sometimes unwanted dogs or cats are literally abandoned in our parking lot. Sometimes, the owners will brazenly bring them to us pretending that they found the animal as a stray. In every instance, the animal suffers. In Bernadette’s case, who knows what might have happened if her owner had surrendered her properly. We might have had a better indication of why her behaviour changed. We might have understood an underlying medical condition. We might have been able to save this big, beautiful, misunderstood girl.
Instead, I’m writing this blog through a veil of tears; tears all too familiar to those of us who choose to work in animal welfare. Our options had dwindled down to one, inescapable conclusion.
Bernadette had a beautiful final day, surrounded by the three people left in the building that she trusted. She took a glorious fall walk with me down the K&P trail and she had two cheeseburgers from a local fast-food place.
Bernadette died peacefully Friday October 21 at 3:30pm. Her nose print and the flowery bowtie that adorned her collar sit just to the right of my computer and they will stay in that spot for as long as I stay in this office. For so many of the animals in our care, we don’t know the battles they’ve waged, the pain they’ve suffered or the conditions they’ve endured. We’re often the last resort on a long and arduous journey. Despite all of that, we save so many of them but sadly not all of them. I can’t help but feel as though I failed Bernadette but I loved her like she was my own and for the two months she was here – I believe she knew that. 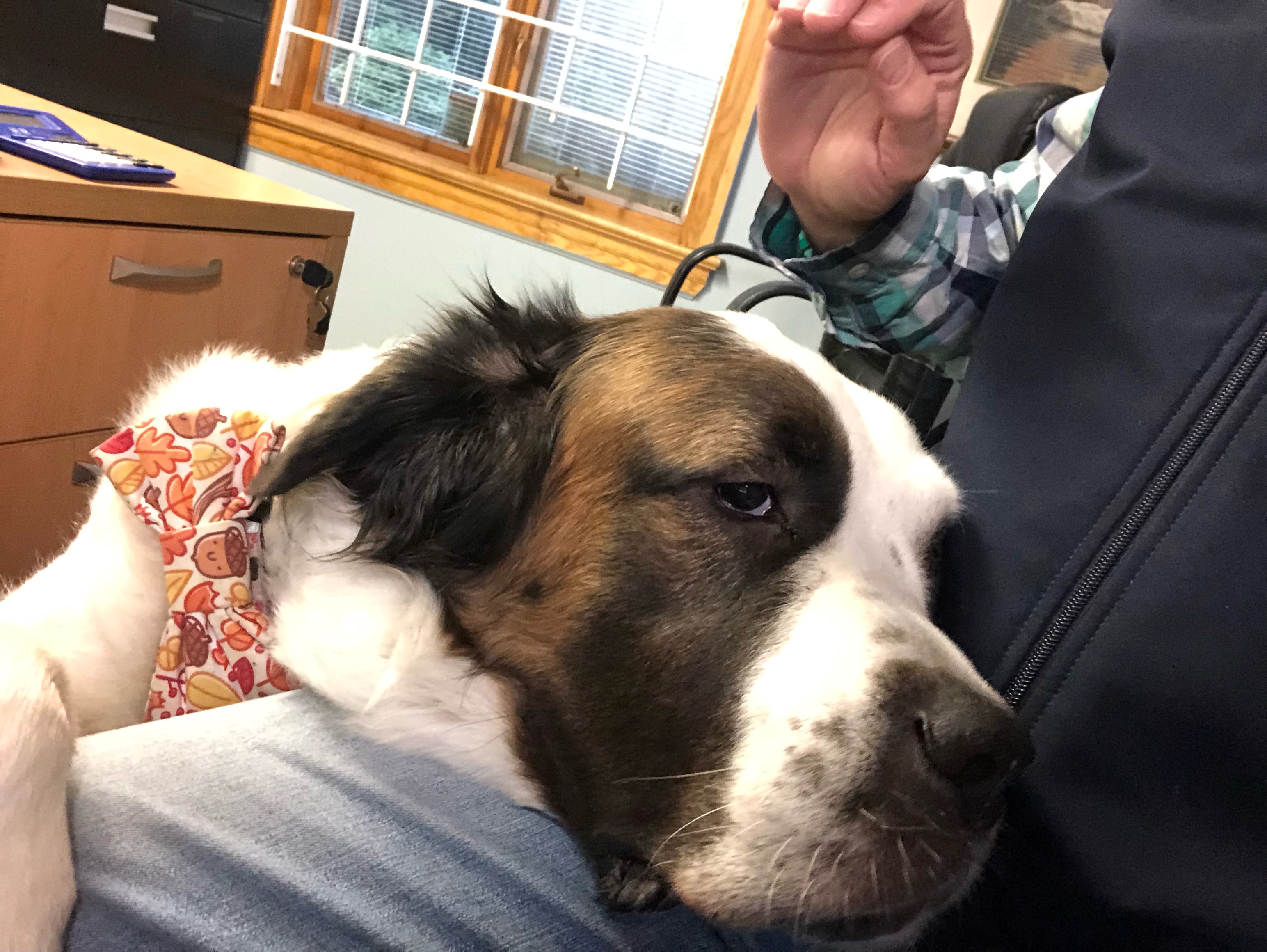 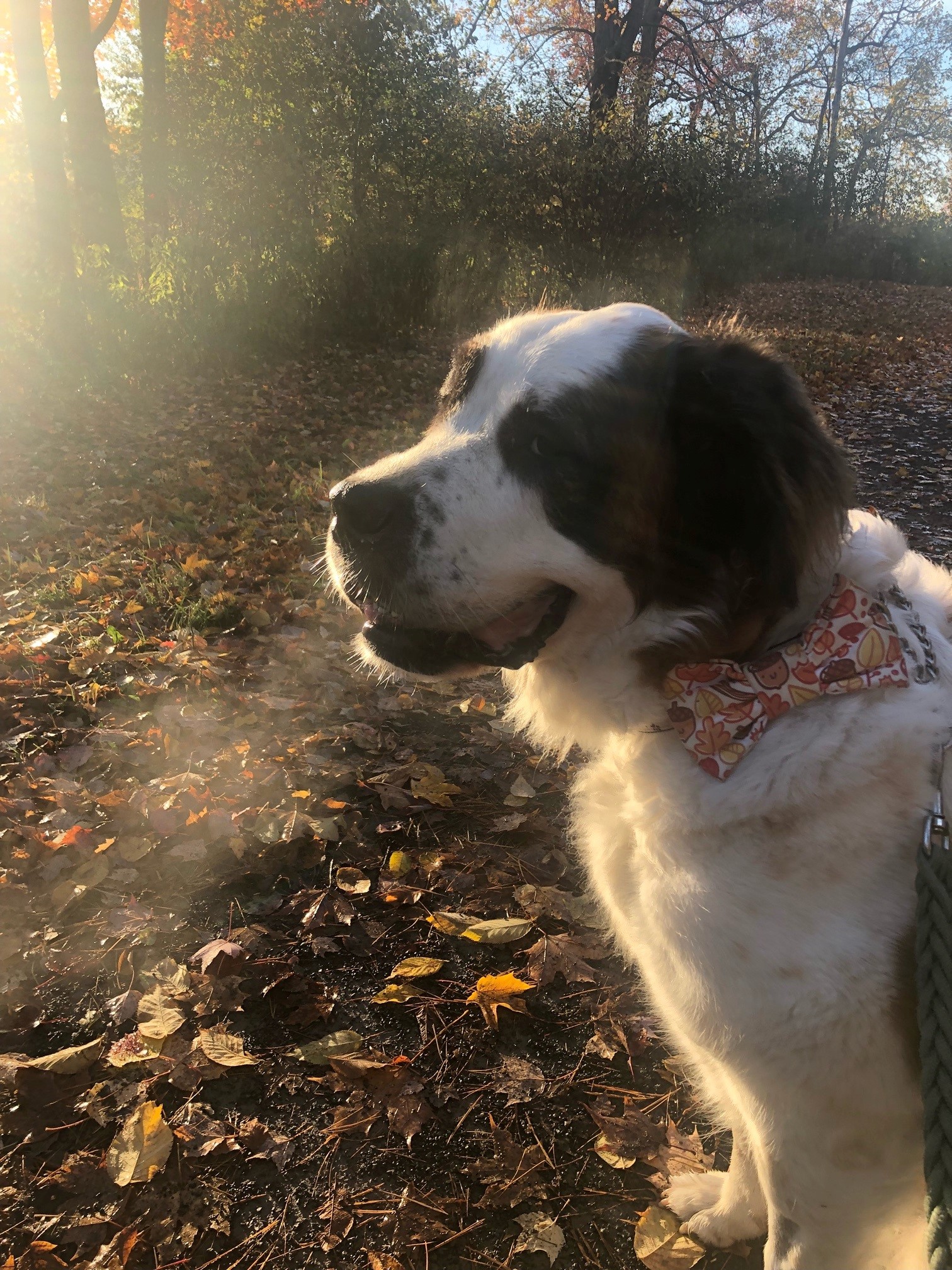