The search for Crane

Hot Off the Collar | Volume&nbsp17

If you’re a pet owner, you’ve likely experienced that empty, terror-stricken moment when you realize that Fluffy or Spot has escaped. That happened to us at the KHS on Friday March 12th when we saw a social media post indicating that Crane – one of seven feral dogs that came to us in September – had managed to escape the day before, while in the off leash zone at Grass Creek Park. Despite knowing that Crane had a 24-hour head start, we mobilized teams to search throughout the park, under every tree and inside every swampy tangle of underbrush. Unfortunately we came up empty. With no direction of travel and no sightings we reached out to SkEYE Stream, a local drone service but it was too windy for them to fly. While we waited for calmer weather, we put out trail cameras. Back at the office we made flyers, used social media and engaged the public. Then we waited. On Monday under sunny skies, the drones went up. After several hours, they had nothing to report. We refreshed the social media posts and kept searching but the prospect of getting Crane back quickly, began to fade.

Crane came to us as a wild dog. He and six other huskies had been left to fend for themselves in remote Central Frontenac. When they came into our care, they were absolutely terrified. It took a month before we could even walk them on a leash. I remember that day; walking Crane and Georgie about half a block. It felt triumphant until a motorcycle sped by us and the two dogs dropped to the ground, cowering against each other. Four months later after so much progress, our boy Crane was out on his own. He was afraid and alone again. How would we ever get him back?

On March 17th, St. Paddy’s Day, we got a message. Crane had been spotted near the intersection of Joyceville Rd. and Fourth Concession. Talia, Courtney, Sebrina and Christie headed out. They spoke to neighbours, searched behind barns, checked under trees and even scoured ditches in the event that the worst had happened. Not a sign. We moved the trail cams. We re-engaged the drones. We waited. A day went by. We restocked feeding stations, downloaded camera images. Still nothing.

On March 19th we had another sighting in Kingston Mills. With two sightings and a confirmed direction of travel we could now engage a pet tracker. Kimberlee Vastino of Thousand Islands Pet Search came on board. She immediately helped to focus our efforts. Once again we moved trail cams and feeding stations, sent out search teams, delivered flyers and updated social. Once again, we were too far behind him. Another day went by…and another.

Tuesday Mar 22 – 11 days gone – and we received a confirmed sighting near the 401 at the Division St. exit. Our hearts were in our collective mouths. We contacted the OPP and we sent out another team. We moved trail cams, set up new feeding stations and once again, delivered and posted flyers to the area. Over the next two days we had multiple sightings. At one point we came within a few metres of him but he got spooked at the last minute and headed back to the safety of the woods. He was in full flight mode; not showing interest in food or even in familiar people. Over the next few days he roamed back and forth, north of the 401, between the Montreal St. exit and the Division St. exit. He was dangerously close to traffic and we all had a sense of dread. He could not possibly cross four lanes of high-speed traffic safely.

On Saturday March 27th, I got this message, “We just got a call from a woman that saw a husky on Princess. We’ve requested a map.” When the map was uploaded, it indicated Crane had been spotted three blocks from my house. I grabbed a can of cat food and a leash and headed out. My wife Ginette took the car and went ahead. Five minutes later Ginette called. She’d seen him behind the Leon’s Centre, heading towards the Frontenac Villas. I ran to that location. Then another call, “I can see him on the docks!” I swiveled around and saw a flash of grey. I headed in that direction and as I approached the start of KP trail, Crane ran within two metres of me. He was still in full flight mode. I updated the team. For the next three hours we followed him across Division twice, Montreal St. twice, into the City yard off Railway and up the K&P trail towards Elliot Avenue. By now, Kim the tracker along with Talia and Courtney from the KHS had joined the search. We told every person we met to keep an eye out. We handed out phone numbers and crossed our fingers. At one point Talia gave her cell number to Erik Round a Paladin security guard who patrolled the area. That would prove to be critical.

Around 2pm we lost him. By 3pm with no new sightings, we suspended the search and updated all the social channels. At 7:15pm, Talia called me. Erik, the security guard had spotted Crane off Railway St. behind the Coke plant. I put supper on hold and got into the car. By the time I arrived at the location, Erik was on site but he had lost visual contact with the dog. Nikki and Sebrina – just getting off a 12-hour shift at the shelter – drove up at the same time. And then came the message from Talia that we’d been desperately hoping for, “We have him.”

I called. Talia confirmed. She had parked in the City yard adjacent to the Coke plant. She got out of the car, spotted a black cat looking at something and then saw Crane. She crouched down and he approached her, sniffing at her face as if to say, “Where have you been?”

When I pulled into the yard, Crane was sitting on the back seat beside Talia. Tears were freely flowing. 17 days after he’d escaped, in the midst of fading prospects and despite numerous perilous approaches to the 401, Crane was once again safely in our care.

When I reflect back on this, I’m in awe of the dedication shown by the staff and volunteers at the KHS. No one gave up. No one allowed despair to edge out hope. No one stopped.

To the community of Kingston; we quite simply could not have done it without you. Your sightings, photos, reports and updates kept us on the trail. Special thanks to Kimberlee Vastino for her knowledge and commitment in tracking Crane. Thanks to Christie Haaima, Animal Programs Manager at the KHS for hours and hours of slogging through the bush with trail cams and food. Thanks to SkEYE Stream for the drones and to Melissa for arranging them. Thanks to Ashley and Lexi for the updates, the searches and the support. Thanks to my wife for her unending support throughout this and for following Crane through backstreets, backyards and building lots on Saturday. Thanks to Erik Round from Paladin for that life-saving call. Thanks to Heather Patterson for the live cameras and ground support. Thanks to Dr. Laurie for the advice, the searches and the optimism. Thanks to Sebrina, Courtney, Nikki and Shevaun. You guys are a part of the best team I’ve ever worked with. And finally, thanks to Talia. I know how tough this has been for you. You spent hundreds of hours with Crane; socializing him, caring for him and comforting him. In the end, it was you that he came to you, you that he trusted and you that got him home.

Not every lost pet story ends happily – we understand that better than most – but this one did and for that, we are truly grateful. 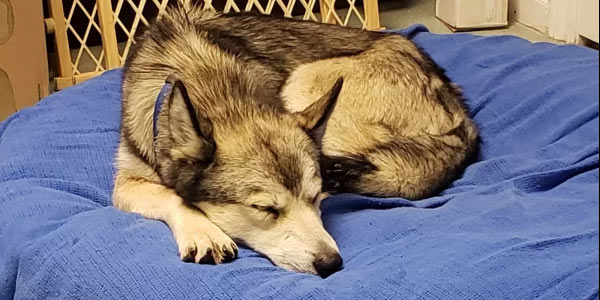