Remembering the soldiers and their animals

Hot Off the Collar | Volume&nbsp3

November is rarely anybody’s favourite month. It lacks the optimism of April and May or the carefree spirit of June and July. And even though November is still technically part of autumn, it seems as if, right after Halloween, the brilliant blaze of October colours is immediately swapped out for skeletal trees and monotone skies. Perhaps that’s appropriate. Maybe the lack of seasonal distractions in the month of November creates a perfect atmosphere for contemplating Remembrance Day.

As a nation, our focus on November 11th is the loss of human life and the men and women who made the ultimate sacrifice in our defense. That focus is clear and should never waver, but as I sit here surrounded by dogs and cats, I find myself wondering about the loyal animals that joined our ancestors in their noble efforts.

To be honest, this isn’t the first time I’ve considered the toll taken on animals in war. My grandfather, Trooper Arthur Hunter, was a member of the Scottish cavalry unit, the Royal Scots Greys. He fought, on horseback in World War I at the Battle of the Somme; one of the most brutal battles in Allied history. He only ever spoke about the war once; while he was under sedation near the end of his life. In those moments, he relived his time on the battlefield. I won’t share the disturbing details but at one point, he screamed out over the number of horses lost. More than 100 years later, I have no idea if my grandfather’s horse survived the war. However, the British army lists 137,931 horses lost from 1916-1918.Dogs also played an important role during the First World War. They were messengers, they stood guard in the trenches and they provided critical, psychological comfort to injured soldiers both on the field of battle and inside hospitals.

Animals teach us valuable lessons about faith, loyalty and unconditional love. Under the worst conditions imaginable, they also display incredible bravery and a willingness to sacrifice themselves for something bigger. The soldiers who protected us faced almost certain death with courage and dignity and they did so for their country and for their family. The animals did the same, in service of their owners.

On Remembrance Day or on any day as you stand beneath the grey ceiling of a November sky, remember those who gave their lives for our freedom, whether human, equine or canine. 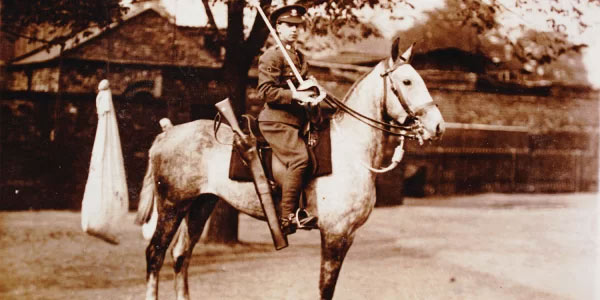