From the worst comes the best

Hot Off the Collar | Volume&nbsp7

Mid-November is a difficult time in animal welfare. The shelters – ours included – are full. Expenses are being carefully monitored as the financial year-end looms. And perhaps most importantly, shelter employees are exhausted by months of working in an environment that is perpetually over-capacity and under-resourced.That was the atmosphere here, when we were notified that seven dogs would be arriving as a result of an investigation. The agent warned us ahead of time that they had been living in a single room with little to no exercise and an unpredictable food source. It also appeared that when they did get fed, food was just thrown on the floor for them to fight over. In a situation like that, the dominant dogs will eat and the submissive dogs will starve.

Despite the advanced notice of what to expect, we could not have been prepared for what we saw. One of the dogs was so emaciated that I couldn’t really process what I was seeing. It was horrific. No medicine or surgery could have possibly saved this poor creature. At the veterinarian’s recommendation, he was compassionately euthanized.

That left six. The remaining dogs were in various states of starvation or medical distress. Some had parasites. All had fleas. Most were suffering with anxiety or traumatic stress. I marveled at the determination of the KHS staff. Their weariness was pushed aside and replaced with a commitment to treat, heal and nurture these animals.

Over the next few weeks, we worked diligently to return them all to a healthy state. As Christmas approached, uncertainty gave way to hope. It looked more and more like these six dogs would soon have an opportunity for new, loving, forever homes. On December 23rd, we realized we weren’t quite correct. One of the females that had come to us so skinny you could count each of her ribs, gave us all a big surprise – she gave birth to five, healthy puppies. I got the word on Christmas Eve morning and shed more than a few happy tears.
That day in November when I witnessed the direct result of abuse and neglect, I was devastated. The images haunted me for days and weeks. I struggled to see anything else. To their credit, the vet techs, veterinary assistants and ward attendants of the KHS – who were also significantly affected – were able to see past the devastation to a positive future.

The puppies became a lesson in perseverance for me and a symbol of hope and strength for everyone here – staff and volunteers alike. We had seen the worst, we had done our best and out of that, came five beautiful new lives.

In just a few weeks, five puppies will have new homes and new families. They’ll have love, and cuddles and pats. They’ll be chasing tennis balls and chasing their tails. None of that would have been possible – their lives might not have been possible – without the steely resolve of 28 committed and resilient animal advocates. Well done team. 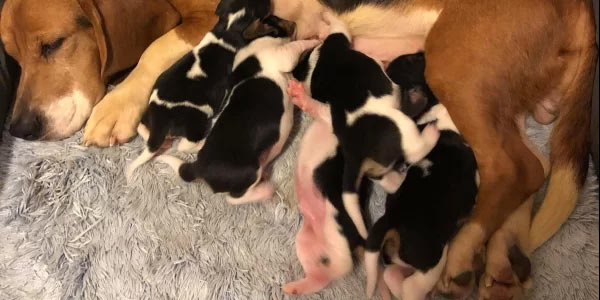