Hot Off the Collar | Volume&nbsp21

The world is a fractured place these days. The social media echoes of conspiracy theories or political rhetoric can discourage the most optimistic souls. When I find myself tumbling down that digital rabbit hole, I turn to my wife or my cats to provide a life-affirming diversion. When it happens at work, I normally take a dog for a walk or spend some time with a playful kitten. Unfortunately, we’re overflowing with both these days so instead of time with our animals providing a welcome distraction, I have been stressing over strategies to alleviate the overcrowding. With the end of October looming, I found myself sitting in my office accompanied by a purring and curious cat who seemed to be saying “Well, what now?

I didn’t have an answer. I thought about maybe taking a photo of the cat and sharing it on social media but that felt hollow and redundant. Instead, I elected to use a decidedly old school approach. I shared our situation with traditional media.

I wrote a press release explaining the situation; 294 animals in care and 111 animals for adoption were both high water marks in our 137-year history. If reporters picked up the story and asked how the community could help I would ask for more foster volunteers, more families that were willing to commit to a new furry family member and as always, money to cover the exponential costs of feeding and treating more than twice our normal capacity.

Then, I sat back with the purring cat still on my lap, and I waited.

The Whig Standard told our story.

What happened next reaffirmed my faith in community.

Everything began arriving in unprecedented numbers. In less than a week, we received over $21,000 in online donations, more than 100 foster applications and over 60 applications for animals currently available for adoption. Then came the call that stopped me in my tracks. It was Linda Ann Daly and her husband Walter Fenlon. They had seen the story in the paper and wanted to help. As animal lovers themselves, their interest was deep seated. They wanted to know how the staff was doing and how the animals were handling such cramped conditions. So I told them first about our staff and how, despite working to exhaustion each day and despite struggling to house animals in meeting rooms and bathrooms, they always found time to show each animal love and compassion. I told them how so many of these animals have been neglected, abused or simply abandoned and yet, they adapted easily to their new living conditions – in large part because of our dedicated staff. As we neared the end of our conversation I could tell both Walter and Linda Ann understood the emotions inherent in our current predicament.
“We’re hoping that $30,000 will help the animals and help your staff deal with this situation,” said Walter.

I wanted to express my overwhelming gratitude for their generosity.

I wanted to tell them that the staff would be thrilled.

I wanted to tell them how much of a struggle we’ve had since the pandemic changed all of our lives.

But each of those thoughts was momentarily delayed by the huge lump in my throat and by the tears rolling down my cheeks.

Eventually I was able to express my thanks. I was less than eloquent and more than effusive but I think I communicated how their donation would change many lives; animal and human alike.

As I hung up the phone it occurred to me that as a result of traditional media like newspaper, TV and radio, Walter, Linda Ann and hundreds of generous and caring community members had given us an opportunity to breathe a small sigh of relief and get back to the business of saving animals. It was the opposite of that often divisive, sometimes necessary, realm of social media. It felt real and overwhelmingly positive.

The next time I’m feeling the negative effects of social media backlash, I now have another remedy. I’ll simply turn on the radio, reach for the remote control or pick up a paper. Each medium may have lost some of their significance but without them, we’d be $51,000 poorer and missing out on hundreds of foster volunteers and potential forever homes. Here’s to traditional media and the role they still play in supporting our community. 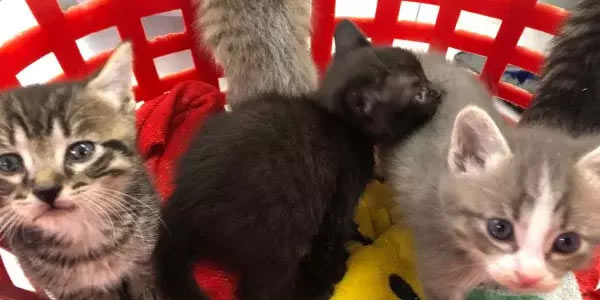